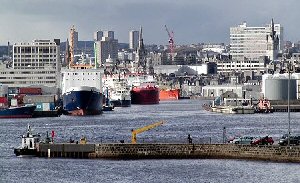 Aberdeen Harbour is a world class port annually handling around 4 million tonnes of cargo, valued at approximately £1.5 billion, for a wide range of industries. With versatile facilities, competitive charges and diversity of traffic, it serves Scotland's third city and an extensive hinterland.

The first recorded reference to a harbour was in AD 1136 when King David 1st of Scotland granted the Bishops of Aberdeen the right to levy a tithe on all ships trading at the port.

There were increasing links with Europe over the centuries, but little was done to improve the port during depressed trading in the Middle Ages. It was to take new trade connections with Scandinavia and the Baltic to bring improvements.

Trade increased to record levels following the Union of Parliaments with England in 1707. With further expansion limited by the harbour bar, the eminent engineer John Smeaton recommended the building of the first section of the North Pier. Completed in 1780, the 1,200-foot section increased the depth of water and provided shelter at the entrance. Another famous engineer, Thomas Telford later extended the section and proposed building a southern breakwater.

A 19th century Act of Parliament vested the property of the harbour in a body of commissioners who were authorized to develop Victoria Dock and portions of Waterloo Quay, Matthews Quay and Blaikies Quay.

The construction of the Albert Basin, the deepening of the entrance to Victoria Dock with hydraulically-operated gates, the building of Jamiesons Quay and work along the River Dee followed.

The advent of steam trawling in the 1880s meant a significant increase of activity and further developments to accommodate the fishing industry.

In the first half of the 20th century, the development of a modern port continued: the entrance channel was deepened, transit sheds were built and a large floating dock provided. During World War II, the harbour was an important naval base; air attacks caused considerable damage and the requirements of the war effort affected trade and development. Following the war, deep-water berths were constructed at Atlantic and Pacific Wharfs.

The arrival of the offshore oil and gas industry in the mid 1960s resulted in a remarkable programme which was to virtually rebuild the harbour in the following decades, transforming it into one of the most modern ports in Europe. While North Sea oil was to be the catalyst for much change, other harbour users were not neglected and they have also benefited from specific projects and general improvements.

During the '60s, Pacific Wharf was further developed to provide additional deep-water berthing; the navigation channel was deepened; four steam tugs were replaced by two diesel vessels; craneage was modernized and increased; and the floating dock was replaced. The rebuilding included Waterloo, Regent, Trinity and Upper Quays. Victoria Dock was dredged. The Regent and St Clement bridges and dock gates were removed and, in a highly significant development, the port opened up to 24-hour operations. The fish market was reconstructed.

A new roll-on roll-off terminal was built by the Harbour Board. A second terminal for international ferries was later established and a floating linkspan introduced. By 1984, nine oil bases had been developed at the port, some to serve particular operators, others being multi-user.

As traffic rose to record levels, investment continued apace through the 1980s and into the 1990s, with the development of forest products and grain terminals, transit sheds, quay reconstruction and extension, general improvements to facilities and services.

The lack of orders in the ship building industry caught up with the port's last remaining yard and the fine tradition of shipbuilding in Aberdeen ended with its closure in 1991. The location was redeveloped to provide a new multi-berth deep-water and ship repair facility - Telford Dock, the largest single investment project at the port in the 20th century. The dock commemorates Thomas Telford, who shaped much the modern harbour. The names of the quays - Russells, Duthies, Halls and Clipper - are another link with history, recalling the age of building clipper ships.

The evolution of Aberdeen as a world class port continued through the 1990s and into the 21st century, with a range of projects benefiting users, including initiatives to strengthen the fishing industry; to attract larger vessels operating in the offshore industry; and to develop container traffic. The redevelopment of deep-water Matthews Quay provided a third roll-on/roll-off terminal, handling international traffic, as well as multi-user facilities.

It was announced in 2002 that BP Exploration would transfer its offshore marine support operations to Aberdeen, using a new base at Albert Quay, from the following year the largest single offshore industry operator to move into the port since the early days of the industry.

In 2002, a Harbour Revision Order reconstituted the Board in line with the Trust Board Guide to Good Governance. New Members, contributing winder experience, took up office in January 2003.

The port's integration into the everyday life of Aberdeen and the North-east includes its place in the community. Sponsorship includes the Aberdeen Harbour Gallery in the award-winning Maritime Museum and schools projects.

Today, Aberdeen Harbour handles around 4 million tonnes of cargo annually, with some £1.5 billion, and inputs over £100 million a year into the local economy.