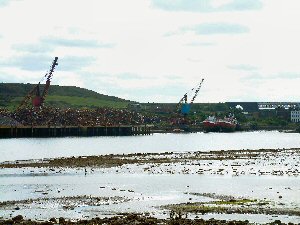 Up until the mid-19th century coal from the pits of nearby Dunfermline was loaded on to boats at the harbour.

This harbour has the distinction of being visited by the most gracious liners of bygone days. Sadly however they were on their last voyage, as they were due to be broken up here. One of the largest was the 'Mauretania', scrapped in 1965.

It has deep water, an excellent harbour wall and is accessible for up to half tide.

The harbour is still used commercially, mainly for limestone exports.