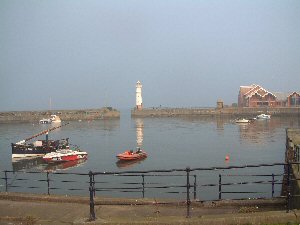 At the western extremity of Leith Docks is Newhaven Harbour, Edinburgh's traditional fish market. Newhaven, still a distinctive community in the seafaring tradition, can trace its history back to 1504. Newhaven retains some of the characteristics of a fishing port and a reputation for fish restaurants.

The famous Newhaven fishwives used to wear distinctive Flemish caps, brightly coloured waistcoats and aprons and distinctive spotted kerchiefs. They carried impossibly large creels (baskets) to markets in the city. The tradition is still kept and there is a fishwives choir. As with many seafaring places, it is full of traditions and superstitions - for instance don't whistle or sing 'Danny Boy' or pass a nun on the way to the boat.

Founded by King James IV (1473 - 1513) as a royal dockyard to permit the building of much larger ships than was possible at Leith. James built housing for an international workforce, including French, Dutch and Flemish, together with the Chapel of St Mary and St James (1505) of which only the west gable remains today.

The most famous ship built at Newhaven was the Great Michael, the biggest of its time, which was launched in 1511 following six years of work. It was 73m (240 feet) in length, 11m (36 feet) in width and had a hull of oak some 3m (10 feet) thick, with a crew of 420 and capable of carrying 1000 troops. It is said its construction laid waste to all the woods in Fife.

Newhaven was known as the premier oyster port of Scotland from 1572 until around 1890, when they became scarce due to overworking. Herring was the main-stay from the late 18th Century and Newhaven became the fish-market for Edinburgh in the late 19th Century Photographers David Hill (1802-70) and Robert Adamson (1821-48) made a unique record of the Newhaven fisher-folk in 1843, one of the first uses of photography in social history.

The Society of Free Fisherman of Newhaven, which remains active today, gained their Royal Charter from King James VI (1566 - 1625) in 1573. Newhaven fish-wives, with their cries of "Caller Ou" and "Caller Herrin", were a common sight on Edinburgh streets from the middle-ages, but the last one retired in 1974.

A detailed history of Newhaven's fishing village can be found here.