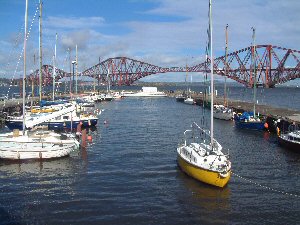 Queensferry had become a flourishing seaport by the 17th century, trading in coal, wool and hides and importing wine, silk, linen and timber from Europe and Scandinavia. The towns leading burgesses were merchants, ship-owners and masters as well as local guild craftsmen. In 1627 Charles I erected the town into a Royal Burgh and freeport and in 1636 it separated from the parish of Dalmeny, with a church building of its own. War, pirates, the plague and even witches were a common threat, but the towns prosperity at this time is evident from the number of fine 17th century buildings which still survive. For this reason the old town is safeguarded as an Outstanding Conservation Area with many listed buildings.

Despite the development of a soap-making industry, the first of its kind in Scotland, and the continuation of linen weaving and candle-making, the towns fortunes and its trading fleet declined. A fishing industry and a distillery brought some employment, but apart from the arrival in 1866 of the railway branch line from Ratho, the industrial expansion of the Victorian period had little impact. Until, that is, the year 1883, when the Forth Rail Bridge and the demands of its 3000 workforce brought renewed prosperity. The bridge workers were well served by the towns hostelries, like the Hawes Inn, made famous by Sir Walter Scotts Antiquary and Robert Lewis Stevensons Kidnapped.

In the 19th century, South Queensferry - or Queensferry as it was more commonly known - was famous for its young herring. Known locally as garvies, which were salted and exported to Scandinavia and the Netherlands. Inchgarvie, the island under the Forth Rail Bridge, takes its name from the fish that swam around it and brought wealth to the town.

In the herring season women cam to the town to gut, salt and pack the fish while carters removed the full barrels. Locals felt that these hard-living visitors lowered the morals of the town! In the 18th century boats brought in kegs of contraband brandy which smugglers rolled along secret tunnels from the shore to Black Castle.

Glenfirth, the towns first distillery, was built in 1838 behind the harbour, in the reign of George IV.

In the 17th century the Covenanters rebelled in protest at the introduction of bishops too the Presbyterian Church by King Charles I. Hunted down by the Kings men, they hid in the attics and cellars around the harbour, waitinbg for a Protestant tide. At high tide they embarked on one of the towns fleet of sailing ships and headed across the North Sea to the more tolerant Low Countries where they could freely practise their faith.

The harbour is now used mainly by leisure craft.