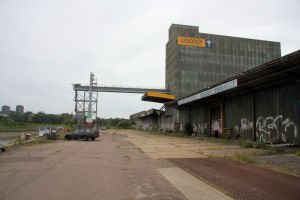 The former quay at The Hythe has now closed, but the local council retains ownership of the site. Severe siltation problems in the River Colne contributed largely to its closure.

Since Roman times, the River Colne has been the source of trade for the people of Colchester. Whilst the need for river transport ceased with the effective closure of port, the river retains its symbolic significance as Colchester's link to the sea and beyond. However, years of neglect have left the harbour in poor condition

The area has now been turned into residential and business accommodation. The Colne Harbour project seeks to regenerate the east bank of the river.