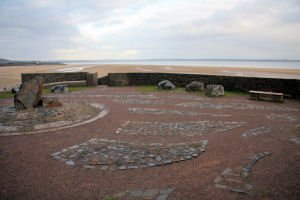 Pembrey, one of the oldest manmade harbours on the South Wales coastline, is undergoing a £200,000 facelift as part of the Millennium Coastal Park project in Llanelli. Expert craftsmen have restored the walls of the 170-years-old harbour which has been listed as an Ancient Monument of National Importance by CADW.

Pembrey Harbour was built in 1819 to handle the increasing traffic in coal from local mines. Soon after its opening the harbour became badly silted up and finally abandoned in 1878 following the completion of Burry Port Harbour less than half a mile yards away.

Much of the restoration work has been concentrated on the harbours western breakwater, which held a gun emplacement during the Second World War. When the harbour is completed the pier head will feature a large iron cast sculpture; it will be a superb look out point offering views over the Burry estuary towards the Gower peninsula and across The Saltings nature reserve.