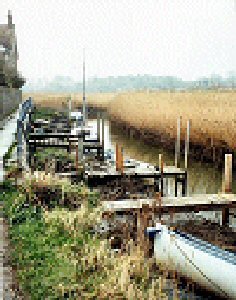 Cley is a former port left stranded by the receding sea. 'Cly', if you want to be in with the locals, is on the edge of one of Britain's foremost nature reserves.

Cley's early seafaring days were not exactly peaceful ones. By 1317, the harbour was reported to have been "in the grip of organised gangs of pirates". In 1405 Cley seamen, including one Nicholas Steyard, boarded and captured the 'Maryenknight', which was carrying the young Price James of Scotland to France.

In the 15th and 16th centuries, the village overlooked the vast Glaven River Estuary and the marshes were covered at high tide allowing boats to navigate into a harbour close to Cley Church and also up as far as Glandford; as such, Cley was the main port for Holt.

In 1637 a local landowner, Sir Henry Calthorpe, embarked without consultation upon an ambitious reclamation scheme which involved putting a dam across the river Glaven and enclosing the marshes. It was to have far reaching effects. Although the bank was demolished after two petitions to the king, the damage had been done - the river course had already begun to silt up, effectively putting the wharves below Cley church out of action for good.

In 1649, a series of banks were built to protect the village from flooding but for several historical reasons, the river started to silt up forming an area of outstanding natural beauty and interest.

The village continued to trade, increasingly with the Low Countries (there are many Flemish gables as you walk around the village). However, as the river continued to silt up, international trade declined and coastal trade increased - Cley was a major outlet for the farm produce of north Norfolk. Its success as a grain exporting port led to great resentment in Norwich and the City Fathers even made a complaint to the Privy Council, requesting that its licence to export corn be revoked (it wasnt).

The quay was a busy place until the late 1800s, but the rot had set in. An ever-shallowing river, a new coast road and the coming of the railway to Holt in 1884 all contributed to Cleys demise as a port.

Traces of the old quay remain along the narrow Cley Channel, dominated by a fabulous windmill dating from 1713 which is now a guesthouse.

The Cley Boat Club was formed in 1994, with the idea that people using the old Cley Channel for recreation might need a collective voice with which to safeguard their rights of access following the installation of the new flood defences. From those beginnings, the club has grown and widened its activities to include boating and social events.