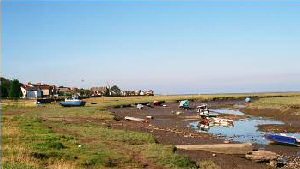 Up until the end of the 19th century, Penclawdd was a flourishing sea port, with several coal mines, and tinplate, copper and brass works. It was a bustling commercial centre for much of North Gower. There was a time, almost within living memory, when it had a railway station, a forge, twenty grocers, three butchers, three drapers and four fish and chip shops; for happy hours, there were eleven pubs and a cinema, and for holy hours, three chapels and a church.

But above all else, Penclawdd was synonymous with cockles and cockling, and this is the only one of the old industries to survive. The famous low-tide cockle beds on the Burry Estuary sands have always produced a good quality harvest. During the Industrial Revolution, women whose husbands were unfit for work in the coalmines turned to cockle gathering as a lifeline, and right up to the 1970s, women were the main gatherers. Working with donkeys, hand rakes and riddles (coarse sieves), the women were tough and resilient, famed for their ability to withstand all weather conditions on the estuary.