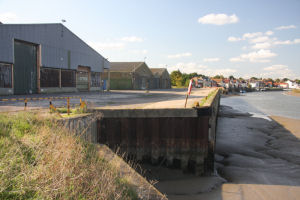 Rowhedge is a small village on the River Colne in Essex. It is first mentioned in 1346 but probably existed long before this, sited as it is between two tributaries of the Colne on rising ground that gives good hard standing for boats as well as protection from winter floods and spring tides. It was also a convenient point to cross the Colne by ferry. Rowhedge was once well known for four things. It possessed its own brewery, it supplied sailors for the racing yachts of the gentry, it built and repaired a variety of small craft and most of the inhabitants earned their livelihood fishing. A lucrative sideline was also smuggling - Rowhedge is less than 40 hours by sail from Holland.

The Rowhedge Iron Works was a shipyard which built many small vessels between 1904 and 1964. Following its demise the quay was used for commercial purposes. The MV Ruhrort of Duisburg brought the last cargo up the River Colne to Rowhedge Quay on 14th April 1999. In 2001 the Harbour was closed by Act of Parliament.

In years long gone there was a regular ferry service across the Colne. This was used by folks to get to work, catch the train from Wivenhoe, visit the doctor, or have the doctor come to them, or seeing friends and relations on the other side. That all ended in the late 1950s when the service was axed. Many years later, in 1992, a ferry was reinstated to connect Wivenhoe, Rowhedge, and Fingringhoe running as a pleasure service at weekends. The ferry provides access across the Colne between these three local communities. It is a non-profit making organisation, run entirely by volunteers.

The Rowhedge River Landing Pontoon was installed in 2005 and officially opened in April 2006. Although Rowhedge is fortunate to have quays, the pontoon greatly extends the time of access to and from the river - a boat of 5ft draught can approach the pontoon for about HW ±2½ hrs, and a clean landing can be made with a dinghy about HW ±4hrs. Boats are welcome to moor temporarily, but are normally requested to move onto the quay at HW if they wish to stay overnight. However, if the owner is happy to dry out, they may stay by arrangement with the water bailiff, Jo Brennan, tel. 01206 728764.