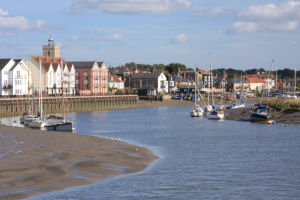 The earliest record of boat-building is in 1575. One Richard Quykeskey rented a shipyard upstream of The Quay which for the next four-and-a-half centuries was central to Wivenhoe's economy. Commercial craft was also owned. Before the seventeenth century was out two packet boats regularly saled for to London, laden with Colchester's bays and says (certain types of wool and cloth). It is virtually certain that in 1650 Robert Page built the ketch Nonsuch which later sailed to Canada and inaugurated the Hudson's Bay Company. After the Civil War, Page built a warship, the Fagons, a frigate with twenty-two guns, one of several naval commissions.

In the eighteenth century Wivenhoe developed as a port and the up-stream shipyard was invariably busy, building fishing smacks and cargo vessels, while a ropery flourished at The Cross for well over a century. The local fishing fleet landed sprats and oysters in large quantities.

In 1863 a railway line from Colchester to Wivenhoe was opened and three years later a branch line to Brightlingsea. Fish, particularly oysters, could now be despatched quickly to London, a boon to the local economy, while materials, such as wood for boat building and slates for the roofs of the houses could be easily brought to the town.

In 1881, John Harvey built a 60 ton steam yacht for the librettist, W.S. Gilbert, and retired from the upstream shipyard. He was soon succeeded by a firm from London, Forrest's, which built a dry dock, the only one between Lowestoft and London. Commercial craft made from metal plates riveted together were now the order of the day, especially paddle steamers. Often, Forrestt's would bolt a vessel together but then dismantle her and send her, in small parcels, to her destination where she would be reassembled and riveted up. One of the first boats to be despatched as a 'do-it-yourself kit' was the passenger steamer Tern (1891). She plies Lake Windermere to this day. In 1899 the steamship Cecil Rhodes was sent to Lake Tanganyika.

The last decade of the nineteenth century and the first of the twentieth were busy ones for the upstream shipyard. In 1905 it produced one of the earliest submarines, a three-man vessel called the Volta weighing 17 tons. Downstream, the reigning Husk was joined by a firm called Cox & King.

The First World War was succeeded by a depression, the upstream shipyard closed and 150 able-bodied men were put out of work. However the town shone with a reflected glory when Captain Albert Turner was appointed skipper of King George V's yacht Britannia.

In 1961 the upstream shipyard finally closed and the site became a wharf where timber was unloaded, and then other cargoes, including coal. This was known as Wivenhoe Port Ltd.

In 1986, the largest employer in the town, the downstream shipyard now owned by James W Cook & Co. Ltd closed, and an era ended. One of the last vessels to leave the stocks was the Jubilee Sailing Trust's training ship, the Lord Nelson, built for disabled amateur sailors. The Duke of York visited the yard to have a look at her.

In March 1992, Wivenhoe Port formally closed. Meantime, at the downstream site of Cook's shipyard the National Rivers Authority constructed a Flood Surge Barrier to prevent the sort of flood that the Town experienced in 1953.

Commercial traffic no longer comes to Wivenhoe, where the former quay is now a housing development. But leisure craft dominate the river, despite the mud flats that appear at mid to low tide. Wivenhoe Sailing Club manages the moorings at Wivenhoe. The club is largely self-financing and relies on the active involvement of its members to manage the club and moorings for the benefit of members. There is generally a waiting list for moorings.