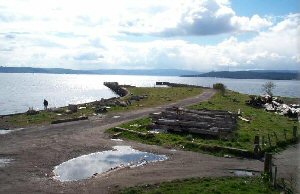 The North British Railway operated the Steam Packet Company steamers from here, from 1882. The station consisted of two through platforms on the line to Helensburgh Central, two through platforms on the West Highland Railway, and a bay platform which extended onto the pier for the steamer connections. The berths consisted of two parallel piers with four berths and a building at the landward end of the piers. The pier station facilities consisted of a single platform with a small canopy. However the sea would break over the sea wall on occasion and soak those waiting.

Following the closure of the service in 1972, the pier was used by small vessels for a number of years. Now, however, the piers are now derelict. Recently the section of pier next to the land was removed leaving the now un-decked piers as forlorn islands.