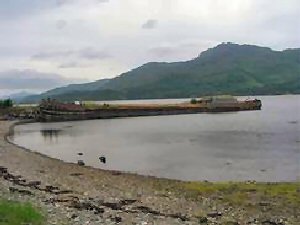 Glencripesdale lies eight miles along a track, from the A884 at Liddesdale, on the Morvern Peninsula. It is not accessible by car. A ferry used to cross Loch Sunart to the jetty at Glencripesdale.

The owner applied unsuccessfully in 2004 to upgrade the barge loading facility on the shores of Loch Sunart in order to load 50,000 tonnes of timber over the next ten years from the Tom an Inbhire jetty at Glencripesdale.

An earlier application seeking consent for a five-bedroom lodge at Tom An Inbhire was also withdrawn following widespread opposition. It would have replaced the estate's former mansion house, built in 1872, but which was destroyed during an Army exercise after it had fallen into disrepair. Both issues are currently the subject of a public inquiry.