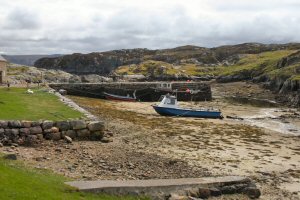 Almost all the buildings around Rispond Harbour were built in 1788, including the jetty. There have been very few external alterations over the last 200 years, so Rispond looks very similar to the day it was completed.

The harbour was once very busy, mainly with wool exports to the Low Countries. The walled garden has black soil thought to be ballast from empty ships from Holland coming to collect the wool. Salt herring was processed at the harbour and it is believed that the first herring to be exported from Scotland to Russia left Rispond and was shipped to St Petersburg. Later it appears that salmon was netted in Loch Eriboll and bottled here for the London market.

During the Second World War Rispond was occupied by the RAF who maintained a look-out for the naval convoys converging in Loch Eriboll. After the war it was bought by Sir Reginald Rootes of the Rootes Group Cars fame and was used as a holiday retreat until 1986.

The harbour at Rispond is private and the owner is considered to be the Harbour Master. Crofters at Durness do have a right of access to the jetty for their fishing boats. In practice only one crofter has used the jetty in recent years.

The buildings surrounding the harbour have now been adapted to high end holiday accommodation.