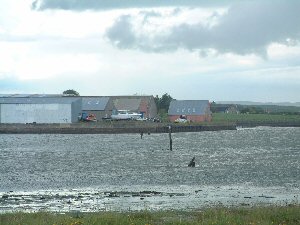 The village of Newburgh was already a busy port in the 15th Century, (and probably long before that), dealing mainly in timber and wool. One of its main advantages to maritime traders was the cheap dues compared to Aberdeen. This so incensed the Aberdeen Town Council that in 1573 they took the law into their own hands and arrested and immobilised Newburgh's trading vessels by confiscating their sails.

Despite the advantages of lower operating costs and being well placed for the increasing agricultural trade in lime and fertiliser imports and in grain exports, Newburgh had considerable disadvantages as a port. The entrance to the River Ythan from the sea and the navigation of the sharp bends of the estuarine channel have always been difficult for largish vessels, and for a very long time there was no harbour facility for loading and off-loading. The first substantial wooden jetty was constructed at the Inches by Aberdeen Lime Company in the 1840's, but prior to that ships had to be loaded and unloaded at low water. The inconvenience this operation caused is elegantly reported in an 1819 survey report by M. Gibb, who had been commissioned to come up with a plan for a loading and he suggested it should be sited towards Ythan Mouth to avoid "the serious consequences to vessels grounding on the banks" further upstream. He also pointed out that "Loading and discharging vessels at the Inches must be performed during the latter part of the ebbtide or first of the flood" and that "those who have to bring grain from a distance or carry away lime, coal etc. being little accustomed to calculate tides, frequently come at inopportune times and therefore wait with great detention and have their horses much injured by being obliged to keep them standing in water whilst the carts are loaded and unloaded on to the vessels". Gibb estimated his scheme to cost about £2,600, but the wharf was never built. If it had been, the estuary and Newburgh's environs might have looked very different today; Gibb envisaged the area to the north of the wharf supporting "storehouses for grain, lime and coal sheds, curing houses, shipbuilding and timber yards with houses for shipwrights, seamen and fishers". Importantly, these plans provide the first detailed soundings of the lower estuary.

The substantial 300' wooden pier at the Inches (built in 1844) permitted the more efficient loading and off-loading of cargoes from ships to shore and also onto lighters or small barges. Whilst it is likely that small vessels plied the Ythan long before George Cruden's 1845 account, the latter is the first detailed description of these boats: "lighters, carrying from six to twelve tons now ply up and down with the tide, aided, when the wind is favourable, by a sail and always be a set (or pole) twenty feet long, in the handle of lightermen. Eight or nine of these, belonging to the shipowners of Newburgh, are employed in carrying lime, coals and bones to different landing places on the banks of the river, the highest of which is about four miles from its mouth". Before the end of the 19th century, several barges could be towed upstream from Newburgh Quay to the Meadows at Ellon by the paddle tug Despatch.

By 1890 much of the maritime trade had centred on Mitchell & Rae's milling complex at Newburgh Quay and Aberdeen Lime Company's facilities at the Inches. A succession of ships, some owned, maintained and operated by Mitchell & Rae, the Aberdeen Lime Company and others in private hands, visited this bustling site. The Ashdene appears to have been the last to visit the quay in 1968. One might expect to find a full log of the comings and goings of ships at Newburgh in Mitchell & Rae's ledgers, but nearly all the company's records were destroyed when the firm was officially wound up in 1978. One detailed set of records that has survived concerns ship movements from 1944-49, where there is reference to many coal ships, including the Ashdene, as well as several Dutch coasters and the Edinburgh dredger Rockchime. Ruby, Despatch, Rumleigh and Mitchell & Rae's (unnamed) dredger are also mentioned a surviving ledger of the iron foundry and smithy operated by John Rae Esq., and sited just along the shore from the quay.

Clearly, the Ythan was a busy trading place until relatively recently, with ships off-loading coal, lime and fertiliser and taking on grain and other cargoes.

Navigation of the lower Ythan has always posed difficulties. The early Statistical Accounts and associated contemporary material note the difficulties of crossing the Ythan Bar (mouth) and then negotiating the sharp turns at the Throat. Wrecks were common and explains why Newburgh was never attractive as a fishing port.

Early maps and charts of the Ythan are thin on the ground. John Ainslie's chart of 1784-85 shows the Ythan, but the scale is too coarse to be really helpful. Gibb sounded the lower estuary in 1819 and there is an Admiralty chart from 1834. Together with detailed soundings made in 1969 and 1995 at several locations between Logie Buchan Bridge and the Mouth, it seems that water depths today are similar to those recorded 150 years previously and probably earlier than that.

There is also compelling evidence that the location of the entrance channel at the Mouth is probably more stable than previously believed. This picture of general stability of the Ythan's channel mudflats and sand banks is consistent with the view that the system is dominated by marine processes which tend to quickly overwhelm and obliterate any small, man-made changes. Vessels coming upstream to the Quay tended to "round-off" the sharp corners of the channel but the effect would only be temporary, with the channel reverting to its natural characteristics relatively quickly. The work done by the unnamed dredger owned and operated by Mitchell & Rae until at least 1914 is unclear, but is likely to have been similar to that carried out by the Rockchime in the mid-1900s. The Rockchime was owned and operated by Granton Harbour Ltd at that time and was at Newburgh in 1938 as well as in 1947 and 1948. Recollections by employees of Mitchell & Rae and detailed surveyors' plans of the Quay reveal that several problematic areas bordering the main channel were cleared and a sufficient depth of water adjacent to the Quay was maintained for vessels. There are also occasional records of a dredger escorting vessels across the Bar. These rather limited attempts to improve navigation are consistent with a picture of overall stability in water depths and channel course. From Lloyds Register of Shipping it is possible to obtain dimensions for many of the vessels which regularly visited Newburgh, and hence estimate how much water they would have needed to approach the Quay. The majority of vessels drew less than 3 metres but even so would have needed to make much of the way at high water with the aid of the Newburgh pilot.

There have clearly been major changes in the way the estuary has been used by humans over the last few hundred years. Most of these changes were wrought by much larger-scale shifts in Scotland's economy. Whereas agricultural improvements created the demand for fertilizer and lime and required ports for the export of its produce, equivalent improvements in boat and fishing technology concentrated folk away from the small coastal villages to the larger ports of Peterhead and Aberdeen. The revolution in railways and road motor transport in the late 19th and early 20th centuries, lessened the need for small coastal vessels. The Ythan has also seen the replacement of the fords and ferries by bridges at Waterton and Logie Buchan. Newburgh quay itself with its present small industries, the builders' yard at the Inches (once the Aberdeen Lime Company's stores) and Culterty Field Station, (which occupies the old offices of Mitchell & Rae) are tangible physical reminders of the estuary's previous life.

(Extracted from "The Ythan: a river of history" by Dave Raffaelli)