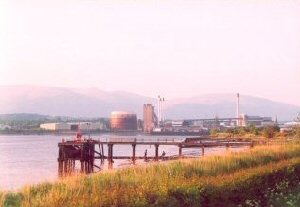 The history of Alloa as a port goes back further than written records. The first record shows that in 1558 coal was being carried from Alloa to Inch Keith, an island on the River Forth. At this time the roads were few and poor. Alloa is high up on the River Forth, therefore, cargoes could be taken faster and cheaper by river to its inland position.

A ferry across the River Forth had operated between what later became Alloa and South Alloa since early medieval times. Under the Earls of Mar, Alloa also began to develop as an significant harbour and trading port.

The trade through the port grew dramatically once coal began to be mined in the area. In 1710, the Custom House that oversaw all the upper Forth ports was built in Alloa: and during the 1700s, Glasgow merchants built warehouses here to hold sugar and tobacco intended for re-export to the continent. A great deal of prosperity in the mid 1700s was due to the tobacco trade with America. After the union of the Scottish and English parliaments in 1707, Glasgow merchants could trade with America. Tobacco was shipped to Glasgow then brought overland on packhorses to Alloa to be taken by sea to Holland and other countries in Europe. For example, in 1720, the Griffin left Alloa with 3,373 lbs of tobacco for Bergen in Norway. Snuff and tobacco made in Alloa was sold in London; it was called 'Alloa Pigtail'. The Earl of Mar made additions to the quay in 1757 and 1761. By that time, there were over 100 brigantines and sloops registered at Alloa. Alloa's part in the tobacco trade stopped around the 1790s when the Forth and Clyde Canal was finished. Goods could then go from Glasgow to Grangemouth. However, the coal trade became more and more important. The Charlotte and the Nelly and Katy were two of the sailing ships which carried coal as far afield as America. Ships delivered pit props for the coal mines regularly.

By the mid 1800s, 2,000 vessels were using the docks at Alloa and 175,000 tonnes of coal were exported each year. Meanwhile, ships of up to 100ft were also being built at Alloa. In 1885 a railway bridge was built across the Forth to the west of Alloa. The columns still stand but the bridge itself has since been demolished. The rail bridge temporarily put the ferries out of business, but they resumed operation in 1901, and a vehicle ferry was introduced on the route from 1924.

The ferries finally ceased operation in 1939, though traffic had been in steep decline since the opening of the Kincardine Bridge to the east in 1936. By the 1960s the Port of Alloa could not compete with modern handling techniques at ports like Grangemouth, and even its shipbreaking operations were too far upriver to be reached by the larger ships then being scrapped. The port closed in 1970 and Alloa has since largely turned its back on its river frontage.