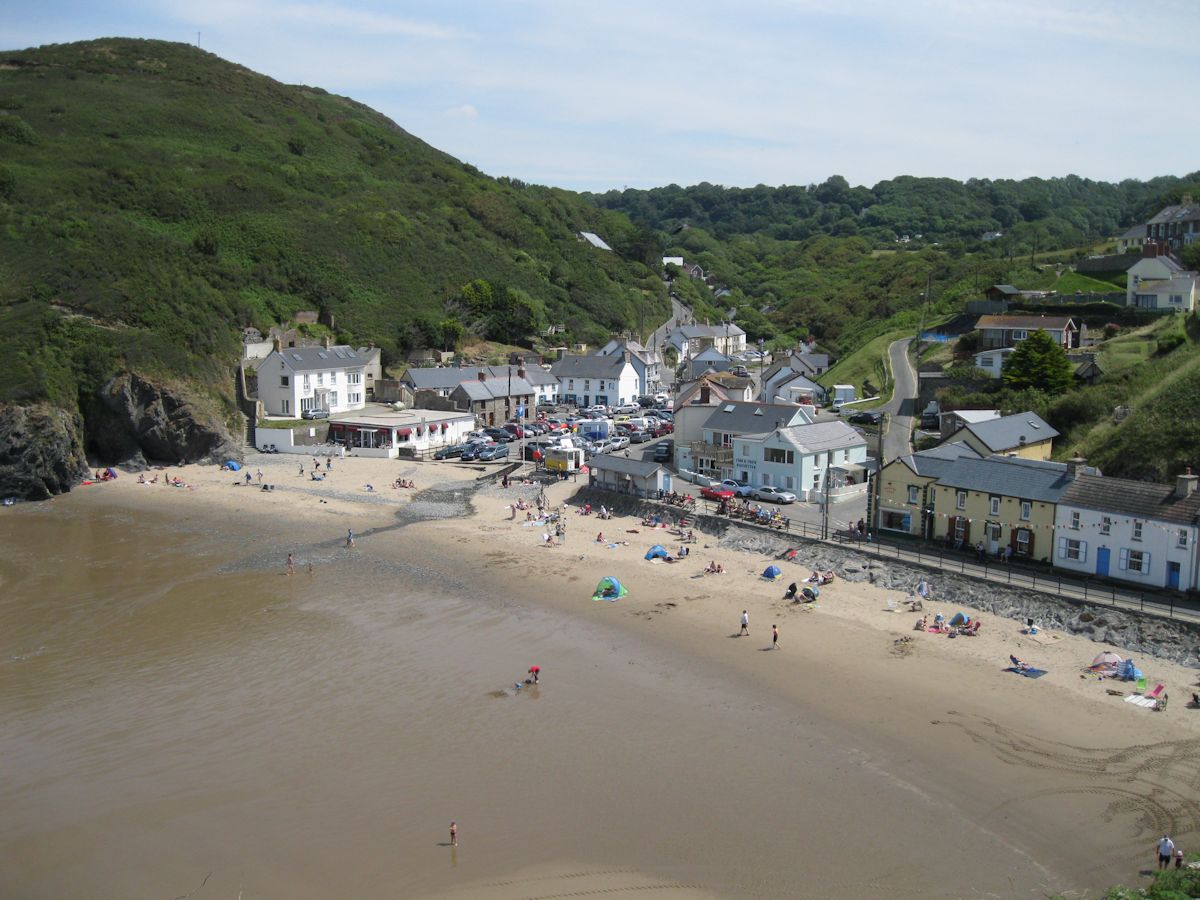 Before the advent of the railways and improved road facilities, the mountains and moorlands of Central and West Wales acted as a natural barrier to movement from the east, and its presence gave sea transport a greater value to the inhabitants of the western coast than the far more hazardous journeys by land.

By 1750, seafaring and trading had become established in Llangrannog and for over a century the village and the Cardiganshire coast became an area of great activity. This was not always limited to peaceful pursuits of trade; the coast between New Quay and Aberporth was notorious for smuggling and piracy. Locally owned vessels, together with Irish and French ships, took part in the smuggling operations, bringing in such commodities as wines, spirits, tobacco and tea. The most important smuggled commodity seems to have been salt, brought in from Ireland and landed on secluded beaches.

Until the mid-nineteenth century, Llangrannog ships were owned either by the shipmasters, by merchants, or by syndicates, but by 1850 ownership had passed into the hands of two families, who in addition held a monopoly of harbour facilities. They owned the lime kilns, coal-yards, and warehouses.

As a seaport, Llangrannog's trading activity was controlled by Cardigan, whose Customs House was responsible for all creeks and harbours between Fishguard and Aberaeron. The vessels that plied the coastwise trade were small and sturdy, and were built to withstand the pounding they were subjected to on the beaches where they were taken to discharge their cargoes.

Most of the trading by Llangrannog ships was with Bridgwater in the south and Mersey in the north. Trading across the Irish Sea was also very important, as it had been for centuries. Not only was Ireland a source of salt, but also a market for local herring, which were preserved in barrels. In the nineteenth century a regular passenger and cargo traffic was maintained by Llangrannog vessels between the Cardiganshire coast and Dublin. The charge for the voyage in 1835 was between £6 and £8.

Maritime activity in nineteenth century Llangrannog was all-embracing, claiming to a greater or lesser extent the whole interest and time of the inhabitants. Even in the last decades of the century, when maritime activity was rapidly declining, as much as 90% of the village population was either directly or indirectly dependent on seafaring. Many were sailors, engaged either in the coastal or deep-sea trade; some were merchants, others were port labourers. Older men acted as pilots, or as 'hobblers' to assist the crews in docking or sailing.

Nowadays there is little remaining to indicate Llangrannog's maritime past. By the turn of the 20th century the developing industries of the South Wales coalfield saw that Cardiff, Newport, Barry and Swansea were to develop as the all-important ports of Wales. The extension of the railway system to Carmarthen and Llandysul in the 1860s and to Newcastle Emlyn in 1895, as well as the opening of the Lampeter to Aberaeron line in 1911, marked the final chapter in the history of maritime commercial activity in Llangrannog and neighbouring harbours. Coal, fertilisers and general goods were now brought into the area by rail and distributed from the railheads by local carriers.

Gradually during the twentieth century, but especially after 1960, Llangrannog, like the other coastal villages of West and North Wales, ceased to be the vigorous maritime community that it had been. Tourism has replaced seafaring as the principal activity of the village and within living memory, a tradition has died

Adapted from 'Llangrannog - Exploring the Heritage of a Coastal Village', by J Geraint Jenkins.