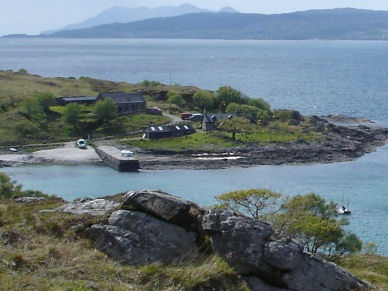 Airor is situated at the end of the public highway from Inverie in Knoydart, and is one of the most remote spots in Scotland. There is a small cluster of houses in Airor with only eight permanent residents.

The pier was supposedly built by local residents employed by the government in exchange for food during the potato famine. Ironically, it is possible that some of those residents were subsequently evacuated from the same pier in the last big clearance (1853).

By 2005 the quay was in a very poor state of repair but Nigel Boston of Pier House spent some £30,000 to have it repaired by local resident Toby Robinson. A Falklands War landing craft is currently moored there.

Access to the bay by boat is best from the south-west, as there is a sandbank between the island and the mainland on the north-east end of the bay.